You know this thing about Queen of Katwe Games? 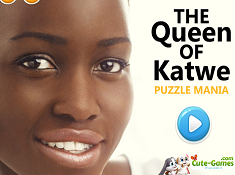 The Queen Of Katwe...